Crocodile Gecko after dropping its tail

Keep in mind that every lizard has its own specific needs based on the size and species, but here are some general rules to follow when maintaining and housing your lizard. First is housing and habitat, you will want to provide your lizard with a good substrate such as coconut shavings, moss, and/or sod as they not only look natural, but absorb odors well, hold their shape, and maintain humidity. Aspen, cypress, newspaper, pads, or carpet can also be used but lizards may get either themselves or their prey stuck to these on occasion and anytime they are exposed to mulch the risk for splinters increases as well. Substrates to avoid would be sand, clay, cat litter, cedar, pine, gravel, or dirt from outside as these can either leach toxins or cause impaction if ingested. We also recommend you provide enough substrate that your lizard may bury itself or dig if it chooses and that at the very least you should completely clean out and replace it every few months unless you notice mold, bacteria, or it is just too soiled to wait until then. Next, it is a good rule of thumb to get your lizard a water dish large enough to soak in, but not too deep that it could drown. We recommend cleaning the dish at least once a week, but if you notice any dirt or feces in the dish earlier in the week then give it a good wash. Some owners do use under-tank heat pads but this can sometimes lead to temperature or humidity becoming too great and can sometimes kill the occupants, in addition, we would also stay away from using any heat rocks as these have been known to cause severe burns in some cases. Each species requires its own range of humidity in which it should be kept in, if you are having trouble controlling the humidity in the enclosure then you can either increase daily misting or if your enclosure has a screen top then you can partially cover the top, provided that you still leave some space available for air flow. Much like humidity, temperature and lighting are also essential for keeping lizards. You should maintain the recommended proper temperature on both the cool side and warm side of the enclosure, you should keep a timed cycle of 12 hours for the basking light during the day and a nighttime bulb for the remaining 12 hours at night, the nighttime bulbs purpose is to ensure that the enclosure does not drop below whatever the lowest recommended temperature may be. If given the opportunity, it is a good idea to take your reptile outside whenever possible to expose them to as much natural light that you can. On both the basking side and the cool side of the enclosure there should be a hide which is large enough for your lizard to hide in. For beginners, we do not recommend intermixing different species as not only could they not get along, but they may have different requirements. If you do manage to house several of the same species in one large enclosure then feeding them separately could be a benefit for each of them as they could become territorial, fight over food, or one could outcompete and take away food from the other(s). A good rule of thumb, though this does not apply to all species, is to not feed your lizard anything larger than the size of its head. When preparing vegetables and fruits, make sure they are properly cleaned, your tortoises should have the same quality food you would feed yourself. We also do not recommend leaving live food unattended as in some cases your lizard could be harmed by its prey. We suggest that if you do plan to house several lizards together that you do quarantine any new specimens for at least a month or until you get them checked out by a vet to ensure that both are healthy enough to be around others. Upon bringing home any new animal they will need to adapt to their new environment and will be under some stress so if your lizard does not eat for the first week do not panic as this can be normal, but if this behavior continues and they do not eat then we would recommend getting them checked for possible medical issues. Lastly, do not forget to ensure the lid on your enclosure is well secured as they will likely escape if given the opportunity.

Chameleons can experience tongue over-extension which means that they tried to reach an insect that was too far away and their tongue gets permanently stuck outside their mouth and dries up. This cannot be fixed and will result in the tongue needing to be amputated just where the central nerve ends about an inch or two (depending on the size of the chameleon) and the chameleon will need to be fed with a calcium and protein mix with a syringe through its mouth and hopefully the stress from the event wasn't too harsh and it lives. Impaction is fairly common in reptiles and can sometimes be passed through. However, if it is too much for the reptile, this can lead to  many other internal problems. You can soak them in warm water to loosen it, or some medicines can be prescribed to be injected through the mouth to loosen up what is inside. Sometimes bringing them outside and exposing them to direct natural sunlight can cause them to release. If it hardens then surgery will need to be performed to remove the impaction. Breeding can lead to injuries on many reptiles as well. A lot of biting occurs, and can sometimes draw blood. The best thing to do is to separate the animals and wash the injury with warm water and use a light disinfectant to prevent bacteria from spreading. Do this every day until it heals. Eggs can also lead to some serious issues. Upon laying eggs, it will drain a lot of calcium in addition, it induces a lot of stress on the animal. Some eggs can become hardened and impacted as well, this will require surgery to remove. Mouth rot is another disease that can affect snakes. When a reptile is stressed, its immune system becomes weak and unable to keep regular bacteria in their mouths in check. This can be observable by a loss of appetite, inflamed mouth tissues, pus, dead tissue in the mouth, or drainage from the nose and mouth. It can also be caused by oral abrasions caused by the substrate or live prey. It can be treated by removing the tissue and simply maintaining their environment properly, flush their mouth antiseptic solution or topical antibiotic daily as well as opening and draining lesions. Reptile mites do great damage to reptiles, they breed quickly, spread fast, and can dehydrate and stress out a reptile to death all too fast. Immediate quarantine of the animal and its cage must occur as well as checking all nearby walls, accessories, and other cages, disinfect everything and do not bring either the reptile or its cage anywhere near any other animal. They can be treated by soaking your reptile in water and disinfecting  its cage daily to drown the mites. There are certain medicines that can be provided to kill remaining mites, as well as certain sprays you can use on the lizard and its enclosure that should kill any that are left. Like most animals, reptiles will also need their nails trimmed from time to time, but do be sure not to hit the central nerve within and to cut just below it. Some lizards have the ability to drop their tail either by choice or when threatened, this does not hurt them and should regrow relatively quickly. All reptiles should be handled at least a few times a week and at most every day for some period of time so that they get accustomed to people and do not feel threatened (with the exception of snakes who should not be handled for at least 48 hours after being fed). All reptiles should be handled in a manner in which the would be oriented normally in the wild. When being transported, the animal should have enough room to fully extend themselves and should be placed with a cool, wet paper towel underneath them. 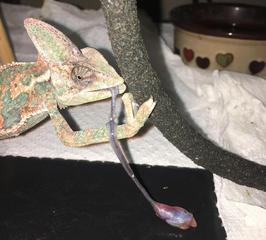 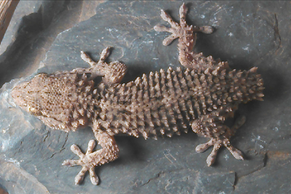 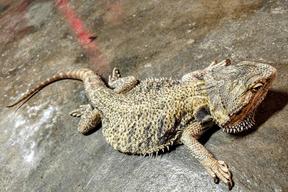 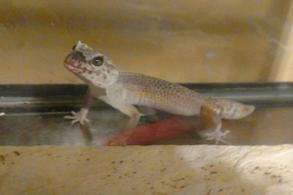 African Fat-Tail Geckos with their eggs 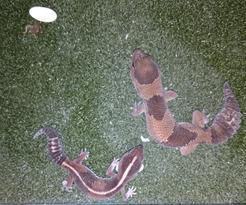